Over 25 people gathered in front of the Six Nations Police Department (SNPD) HQ in Ohsweken on Friday to demand that their officers wear body cameras, take drug tests and conduct a community policing survey. SNPD Deputy Chief David Smoke appeared receptive to the demands and met outside the station with the protestors.

SIX NATIONS – A group of Six Nations residents gathered on the grass in front of SNPD headquarters on Friday. They included family members whose home was recently raided by Six Nations Police while the only people home were four young children and their babysitter. Family members alleged that during the raid, SNPD officers stood over their 14-year-old relative with a gun while pointing weapons at other children in the room.

Also present at the protest was Mike Davis, whose friend Dallas Porter and brother Ryan Davis were brutally beaten by SNP during a raid on their family-owned dispensary. Davis held a sign which read “Bullies with Badges” next to a picture of Porter’s bloodied face.

Deputy Chief David Smoke emerged from the building accompanied by two officers to address the demands of those gathered, which had been presented to him in a letter earlier that day. The new Police Chief, Darren Montour was not on shift that day, and Deputy Chief Smoke said he would be representing the Six Nations Police.

The Deputy Chief said of the bodycam demand, “That is something we are working on already, that is something we are totally in agreement with” to which Davis replied, “That doesn’t matter if you can turn them off.” Davis added, “they’re gonna come in (raid) they’re going to turn them off, they’re going to assault people as they did to us and then turn them back on afterwards”. Another person shouted, “Know who you are, respect your clan, we’re Haudenosaunee,” to which Smoke replied “I am Turtle Clan, I know who I am.” He did not address Davis’ remarks.

Deputy Chief Smoke replied simply to protestors questions about complex issues of sovereignty and Indigenous rights saying “I respect that” as he quickly moved on to the next issue of drug tests. People shouted back “… but you don’t, you don’t respect our sovereignty.”

Deputy Chief Smoke stated that, “All of our officers would have no problem taking a drug test if they’re ordered by somebody with authority to do that to us.” Jeers then erupted from the crowd. Smoke went on: “We’re not going to get drug tests just because a handful of people want us to.” Someone in the crowd pointed out, “As role models of our community, drug tests should be mandatory.”

A woman who identified herself as Val said of SNPD officers, “That anger that comes with steroids, we know that behaviour, we know [which officers] are on it.” Others present weighed in that they too felt that violent behaviour (including the latest raid) by SNPD officers was related to steroid use.

Replying to accusations of violence by his officers during the latest raid, Smoke said “These houses that we serve warrants on; they are selling drugs. We have to [raid] for community safety.” To which a woman replied, “That’s bullshit, their neighbours were selling drugs … that family was being protected from those drugs.”

Deciding that part of the conversation was over, Smoke moved on and said: “Surveys, that would be a good idea, we often conduct surveys in the community for a variety of reasons, this would be a good time to do one now.”

Smoke agreed that systemic change is needed within the SNPD, pointing out that both he and Chief Montour were relatively new to their positions and were looking to implement change.”Just within the last month, there have been transitions: from the old Chief of Police to a new Chief of Police and myself [being promoted] as Deputy Chief. So I grew up here, I became a police officer … to put a stop to what’s happening.” 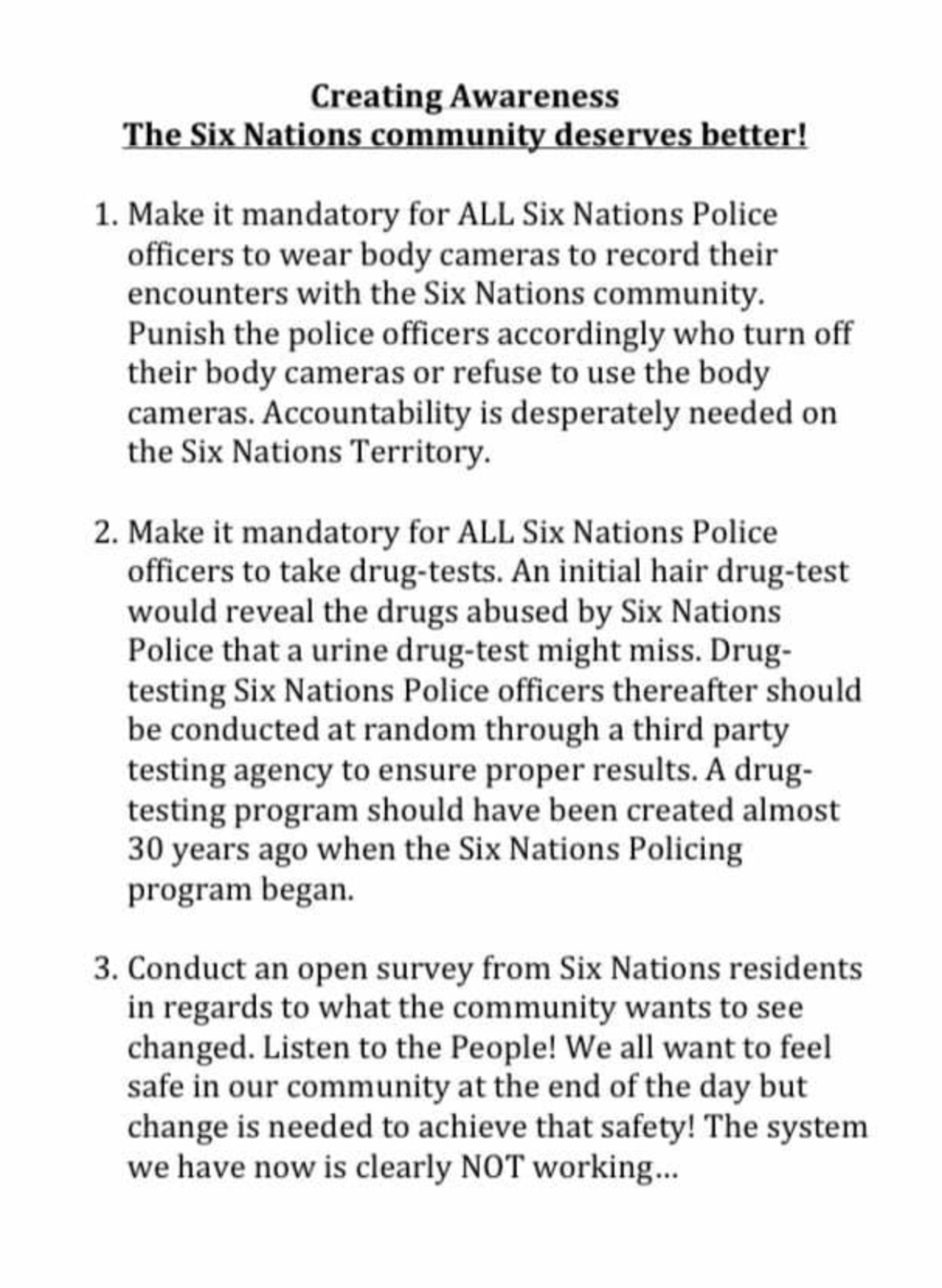 Text of a flyer with demands presented to the SNPD.

The crowd loudly agreed with a woman who alleged that the Six Nations Police were in the pocket of Kenny Hill, the founder of Grand River Enterprises who became a billionaire in the Indigenous tobacco trade. She loudly demanded that the Deputy Chief prove her wrong. He replied categorically “I work for the Six Nations Police, I don’t work for Kenny Hill, I don’t work for GRE or anybody else.”

Not satisfied with Deputy Chief Smoke’s response, Turtle Island News reporter Donna Duric asked him to answer “long-standing concerns from the community saying that the Six Nations Police are in the pocket of Kenny Hill.” Smoke replied while shaking his head, “We do security for GRE for their special events.” A man asked, “How much is the contract for?” To which Smoke replied, “The standard PDO (Paid Duty Officer) rate.” Paid duty officers can be hired to perform police duties for private events, such as directing traffic around movie sets or providing security at outdoor festivals, they are generally not hired to guard private businesses. Deputy Chief Smoke turned and spoke to one of his officers before telling those asking questions about GRE and the budget to “look at the website.”

Snpolice.ca has not been updated since November 27, 2018. It still lists Glenn Lickers as Police Chief and Steve Williams as chair of the police commission; neither presently occupy those positions. The site does not contain any information on the Paid Duty Officer (PDO) rate for SNP officers nor any budget documents. The PDO rate for Toronto Police constables, for example, is $74/hour.

As Smoke began to depart, a masked woman who had not spoken previously emerged from the crowd holding up a phone; recording him. “My daughter is the 14-year old that had a gun held over her head. What do you guys plan on doing to apologize for what you did? You traumatized her, they’re little kids,” she said, fighting back tears. “My daughter has epilepsy, she didn’t know what the hell was going on. Your officers were told she had epilepsy and they still stood over top of her with a gun over the top of her head, wouldn’t even let her comfort the little kids.”

“I’ll apologize to you right now for that, that shouldn’t have happened,” Smoke replied “Not even knowing what happened there,” he said waving his hand, “I will apologize for that happening.” Smoke tried to explain away the raid saying, “We do what we can until we have the best plan for that entry (knocking a door in). If there are children involved we have contingency plans for that if we know they’re there. If we don’t know they’re there, unfortunately, things like this can happen.”

Colin Martin, Turtle Clan of the Mohawk Nation, Haudenosaunee Confederacy Chiefs Council Police Liaison, and a former SNPD officer himself delivered a statement on behalf of the HCCC. He said, “Enforcement that is mandated and funded by the Federal government will always be an issue until this right is rightfully returned to the Haudenosaunee Confederacy Chiefs Council.” He invited the SNPD to sit down with the HCCC to “infuse” their current mandate with “our traditional teachings of the past to create a powerful, innovative and unique approach to enforcement across our Haudenosaunee territories.”

Martin requested that the Six Nations Elected Council, the OPP and the SNPD all acknowledge the HCCC as the rightful governing authority in Six Nations. He also asked that the SNPD schedule a cultural training program that the HCCC had already offered to them. Smoke took the written statements from Martin saying, “I agree with all of this… the cultural training had begun prior to COVID.” Smoke admitted he was not the most traditional person, but expressed that he wished he was more traditional.

After a Six Nations man asked not to be interrupted and to be allowed to finish his point, Smoke abruptly told everyone, “Then I am done talking,” and went inside to loud jeers and expressions of dismay from all in attendance.